Get Your Chances of Admission to the U.S. Military Academies 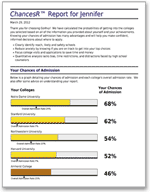 Each U.S. Military Academy has different admissions criteria and standards, so an applicant’s chance of admission can vary significantly from college to college. If you’re curious about which of the U.S. Military Academy or other top U.S. colleges you’re more likely to get into, Go4Ivy can calculate your chances of admission, so you can make informed decisions as to where to apply. Go4Ivy developed a separate algorithm for each U.S. Military Academy, which predicts students’ chances of being accepted by each school. These algorithms are continually updated and revised as the schools change their admission criteria and their approaches. Over the last 15 years our predictions have been over 90% correct (100% correct for the last three years). Go4Ivy refunds the fee for any school for which its prediction turns out to be incorrect. We are proud to have an A+ rating from the Better Business Bureau

About the U.S. Service Academies

You can earn an officer commission in the United States armed forces through one of the federal service academies, also referred to as military academies. The academies are colleges for the undergraduate education and training of commissioned officers for the United States armed forces.  Applicants to all service academies, except for the United States Coast Guard Academy, must obtain a nomination to the school either through a Senator or Representative, the Vice President, or the President. Applicants to the Coast Guard Academy compete in a nationwide competitive process for nominations.

U.S. Military Academy(West Point), Naval Academy, Coast Guard Academy, and Air Force Academy graduates are obligated to serve at least five years in the active-duty military, and at least three years in the reserves. All graduates receive a bachelor's degree and a regular military commission in their respective branch. However, a graduate can apply to serve as an active-duty officer in any branch of the armed forces.

The U.S. Merchant Marine Academy is different from the other service academies because its graduates are not obligated to join the active-duty military, but they do have a service obligation. Graduates can fulfill their service obligation by working as licensed officers on U.S. flagged merchant vessels or civilians in the maritime industry for at least five years following graduation, while holding a military reserve commission. Or they can serve as active duty-officers in any branch of the armed forces or the National Oceanic and Atmospheric Administration's (NOAA) Commissioned Officer Corps.

An officer commission may also be earned through either Officer Candidate School (OCS), the Reserve Officers Training Corps (ROTC), a direct commission from the enlisted ranks, or by being in a certain legal, medical, or clergy profession.

Go4Ivy Has Been Featured In:

Rejecting the Ivies Before They Reject You, 8/25/06

Why No Word From Yale? Web Site May Hold Clues

College Open House: What Are The Odds?